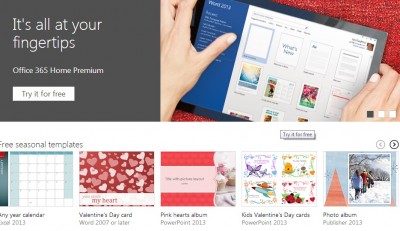 Â only just launched (out of its public beta) andÂ I’veÂ already got it installed. IÂ didn’tÂ even hesitate.

Once upon a time, deciding whether to upgrade to the newest version of Office involved a fair amount of nail biting, asking other geeks if they liked it, reading reviews, and budgeting my time and money once I did decide to bite the bullet. I have been writing in Microsoft Word for so long â€“ since before Google existed if that gives you any idea — that nothing else is really an option for my brain and fingers at this point. And I run almost my entire life in OneNote â€“ organizing and collaborating on articles, collecting research, sharing a grocery list with my family, tracking Web sites — so thatâ€™s a must. But I have had a love/hate relationship with Outlook and only use a spreadsheet these days if someone else really insists. So upgrading has been one of those tasks I hesitated over. But this time all the obstacles are gone. The price is easy: One month free, then $9.99 a month or $99 for the year. That covers five computers so I can install it on my kidsâ€™ computers and both of my own computers. And it comes with 60 minutes of Skype Calling, which is just gravy.

The installation was easy. I went to the Web site, clicked a few times, and let it do its thing while I read email and talked on the phone. It took care of everything: Uninstalling the beta, remembering where I keep my files, setting up Outlook just the way I had it, gathering all my OneNote notebooks together just as they were. It was easy and quick and it even let me use Outlook and Word while it was installing itself.

Microsoft neatly charts the differences between Office 2010 and this new version here. But my favorite aspect is its nifty integration with the cloud.

I work on desktop in my office. I have a laptop for travel and home. And I have a smart phone and a tablet. (I know. Geek! And I’m actually holding back a little there. But you’ll have to come to a geek’s anonymous meeting to learn more) If I am writing something â€“ this blog post for example â€“ and my daughter calls me needing a ride, I have only to save this file to Skydrive (which is a choice Word gives me when I save) and go get her. At home, when I pick up my Windows phone, tablet, or laptop the file is already there. (Or I can get it on the Web site.) So I can keep working when I get home without fumbling with key drives or online backup. I don’t even think about it anymore. I save everything to the cloud unless I’m just storing it for posterity.

I had already gotten hooked on all of this in the free preview trial so I had to upgrade. It was too late to go back. But I had my moments of paranoid scowling where I was sure Microsoft was getting me hooked on the new version so it could hold me up for my lunch money later. And I would have no choice but to pay the bully. But it isn’t so! Not only can I easily afford it, I can magnanimously offer it to my two teens. It’s a great tool for school so I’ll be installing it a couple more times today.