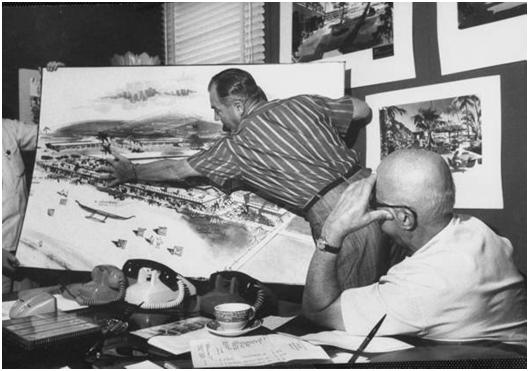 If you read the news you know that unemployment is bad. Does that mean that everyone is sitting around in their underwear, watching daytime TV, and waiting for the repo man? I know there is probably some of that. But I also know that for some people, this economy is, “An opportunity in work clothes.”

That phrase was coined by one of this country’s great industrialists, Henry J. Kaiser (shown planning the first tourist destination in Hawaii). If you read the link on his name, you will see that he started with pretty much nothing at 13 and used that simple philosophy to build â€“ among many other things â€“ the two-man wheelbarrow, The Hoover Dam, an empire of companies that include Kaiser Permanente, the Liberty Ships in WW2, and tourism in Hawaii. He is also often credited with the term, “There is no such thing as a big job, only small machines.” But that was probably coined by his business partner R.G. LeTourneau. Kaiser built his empire â€“ and changed the world — during the Great Depression. So you can’t say his success was because he lived in better economic times than we do.

Many small businesses in this country now, though, are run by women. These are women who seem, to me, to understand this “opportunity in work clothes” idea. In fact, Tara D. Spann, Director of Diversity Initiatives at Staples said in a press release issued by the Women’s Business Enterprise National Council about its San Francisco fair in June that, “While the economy is taking a downturn, the women at this conference have made the choice not to participate in a recession. Instead, they are thinking ahead of the curve and preparing themselves for the needs of their global customers.”

So for many women, I’m sure, this economic downturn is an opportunity. It’s a chance to get out of a job you didn’t like and start a business . Or it’s an opportunity to rethink a business you already started. In an era when all it really takes to start a business is a corner of the living room, an internet connection, and a great idea, why would anyone just sit on the couch?

Oh, you might also need some business cards to get you started. In fact, it was the arrival of my new box of business cards that got me thinking about this post. It used to be that the minutia of running a business â€“ like getting new business cards and a phone — was a chore. But since I started using Moo.com about two years ago, I love ordering cards. It’s quick and cheap, too. I used images I found on the site. But you can use pictures of the product you are selling, your artwork, yourself, or anything you want. The mini-cards are great for handing out at trade shows or parties. They are too small to fit a mailing address on the back but that’s fine with me. That way, people who have my card have to email me for a mailing address. That feels a bit safer. And people seem to love the unusual format. But Moo.com recently launched normal-sized business cards. So I ordered some of those to match for those times when I want an address on my card. Aren’t they pretty?

And of course, your business will need its own phone number. That was once expensive and annoying, too. No more! You could put your name in the waiting list (now open to the public) at Google Voice and get a free phone number that forwards to whatever phone you tell it to or goes straight to voice mail after 5pm â€“ or however you set it up. It has a ton of cool features but is invite-only at the moment. Google told me recently though that if you put your name in the hopper now, you can expect an invite soon as they are rolling the service out slowly to people who weren’t in the beta test.

Or you could get a phone number that rings to your computer (or a host of phone devices) and lets you make calls to anywhere very cheaply. (As in $3 a month or less. Use this link to getÂ Unlimited calls to landlines with Skype. No long-term contract.) I run my business off a Skype phone number and it is terrific. I can forward my number to my cell when I’m traveling, make and receive phone calls from my desktop, my laptop, my netbook, or a little cell phone-sized Skype phone. All I need is an internet connection.

Neither of these optionsÂ has address information attached to them so they are a great choice if you want to work out of your home but fear people doing a reverse search on your phone number and pester you.

What else do you need to operate a home business? Maybe a computer? I got in a Gateway NV5807u ($599.99) that would make a beautiful home business machine. It’s pretty, speedy, powerful, and has a crisp 15.6″ screen that I could look at all day â€“ even after work to watch Hulu. I was quite taken with it â€“ especially the price. It has high-end specs (an Intel DUO Core processor, 4 GB of RAM, and a 320GB hard drive) at a price that used to be considered “budget.”

The best thing about working at home, though, is showing up for work wearing slippers!

2 thoughts on “An Opportunity in Work Clothes”