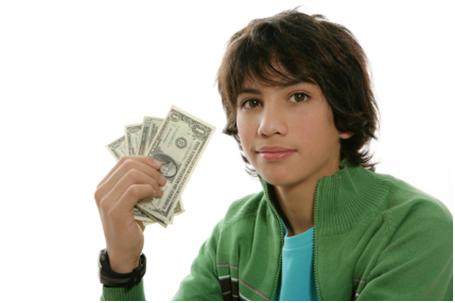 With two kids (10 and 13) in tow that is a pretty typical day of cash requests. I certainly don’t say yes to all of them. (Just this one day would cost over $100 if I did.) But by the end of the week my strength tends to wane and throwing cash at a kid begins to look a lot easier than saying no over and over again, getting into an argument, and being called “a meany.”

While researching an article recently, several money experts handed me the solution: Give the kids an allowance that is big enough to reasonably cover their expenses for entertainment, savings, and clothes. I implemented this plan back in May. (And you can read more about that here.)

Overall it’s been a terrific success. My answer to all the questions above is now: “It’s your money. Spend it wisely.” And, they do. Maybe they don’t spend it the way I would. For example, they always buy more games than I would permit. But then they don’t have money for other things and they see that the game-buying frenzy might not be serving them well. They have both come to embrace GameFlyâ„¢Â

But managing the flow of cash was a hassle at first. My daughter stashed her money so safely in her room that she couldn’t find it again. Then she insisted her brother had stolen it. Without Veronica Mars or Nancy Drew to solve the case for us, that became an ugly fight –until I found a stash of cash in her t-shirt drawer. And the thirteen-year-old was shocked when his money was gone and also claimed someone had stolen it. (With a dark, angry look at his sister.) That took a little math to solve: Video games add up fast.

So for the past month, I have been using a Visa service called PayJr. (For kids 13 and up.) Paypal also just launched a student service, this month that has much better features such as the ability to find the student account via text message and free transfers. (I will switch to the Paypal service eventually because of the fees –$4.99 a month for the service and $2.99 for transfers — at Payjr.)

Now instead of giving the teen cash, I set him up with a prepaid debit card with his allowance loaded on it. He can spend that anywhere, see his account balance online, and get notified when his balance is getting low. It’s much easier for me since I can just tell it to automatically load his card with his allowance at the beginning of the month. I could even set it up so that it would automatically pay him when he finishes chores. If he loses his card, he can get a new one and he hasn’t lost any of his cash â€“ beyond the card-replacement fee. And he can see clearly where all his money went so he can avoid falsely accusing his family members of theft and learn from his own spending mistakes. My kids are both home at the moment but if they were off at college or camp I think I’d find either of these services even more necessary.