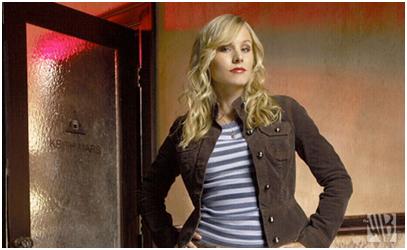 My daughter and I have lately been on a total “girl detective binge,” as my son put it. We have been watching the long-cancelled-but-worth-watching Veronica Mars series at The WB â€“ sometimes two or three episodes at a time. And when we aren’t watching Veronica solve mysteries at her high school or in her fictional California town of Neptune, we are helping Nancy Drew solve a mystery in a museum in Washington DC in Nancy Drew: The Secret of the Scarlet Hand.

The Nancy Drew game is a blast. And the mystery is not easy to solve. We are putting our heads together, brainstorming ideas, and asking, “What would Veronica do?” (Veronica tends to do more background checks and stakeouts than Nancy so that question is mostly for our own entertainment.) Even my son, who is normally quite insistent on sticking to games targeted at his 13-year-old-boy demographic jumps in looking for clues if we leave the game untended for a moment. He is the one who took the time to learn the Mayan numbering system — essential to finding one of the clues we needed. Like all of these Nancy Drew games, there is a fair amount of learning along the way. In this one, a working knowledge of Mayan culture is key to the case so we are all getting up to speed. We are determined to get back that stolen jade carving and find out if there is something fishy going on behind the scenes of this seemingly respectable museum. And Nancy, of course, never dips into territory â€“ the way Veronica Mars does â€“ that makes me declare, “Inappropriate!” and cover my daughter’s eyes and ears. The closest Nancy ever gets to a teenage boy is a phone call to the Hardy Boys.

3 thoughts on “A Girl Detective Binge”