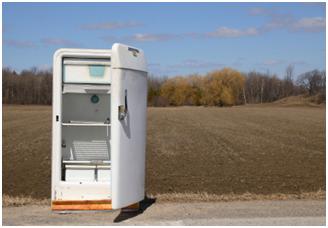 I have been writing about online shopping since the idea was pretty new. So over the years, I have bought just about everything online â€“ either for myself or as research for an article: Jewelry, underwear, furniture, toys, cars, computers, flowers, light bulbs, groceries, and much more. But I have never purchased a major appliance this way. That may be about to change.

When we remodeled our kitchen nearly ten years ago, we bought a GE Profile fridge. We hated it almost the minute we got it home. I ripped the vegetable drawer out in a fit of anger when we had owned it only a few months. My relationship with this fridge only got worse from there.

On the plus side, I have gotten to know some very nice refrigerator repair people over the years, all of whom are now on friendly terms with my dogs. These guys have been to my house more often than some of my closest friends because we’ve had this fridge repaired â€“ on average â€“ every three months.

Another positive: My husband (Dan) and I are collaborating on a TV pilot in which the fridge plays a starring role. It randomly tosses ice cubes at people in the kitchen. The door falls off at breakfast. It (more than once) fills the basement with two feet of water. And it bursts into flames while we are having an argument.

The things it does not do well? Keep food cold, make ice consistently, and freeze things. The script so far is a lot like the Lucille Ball Show. And we haven’t had to make anything up.

Last night we finally decided it was time to get a new fridge because the door no longer closes. All the food in there is slowly rotting Â and the dogs are eating a bit too well. So we spent an hour this morning (via Skype chat) shopping for a new one.

According to the EPA, “An appliance has two price tags: what you pay to take it home and what you pay for the energy and water it uses.” So we started our little shopping spree by narrowing our choices to those fridges that have are ENERGY STAR rated. You can search for these at Energy Star. Also fun is the energy-savings calculatorÂ that will help justify a purchase by telling you how much you’ll save every year by operating an ENERGY STAR rated appliance. (As if no longer having to skitter through the kitchen to avoid the ice cube assault or sign two dogs up for Jenny Craig isn’t enough, we will also save over $100 a year on our electric bill!)

We also checked out ConsumerReports.org ($5.95 for a one-month online subscription) for recommendations. Then we looked at what was in stock locally at Sears.com, Lowes.com, BestBuy.com, and HomeDepot.com.

Next we browsed some sites that sell via the Web. Some local merchants charge for delivery but these online merchants have tempting free shipping offers and charge no sales tax. (This varies by your location. If they don’t have a physical location in your state, they don’t have to charge tax).

Dan wants me to point out that the best prices online were at merchant he calls, “Brooklyn camera dealers.” These places — such fotoconnection.com — are, he says, “Places to avoid at all costs.” For more on why, you could read the article he wrote on it at Computer World. I would never buy from an unknown merchant just because they offered the best price. But I pass that along as an FYI.

That still left us with legitimate-seeming sites such as Number 1 Appliance, which offered the Maytag fridge we’d settled on for $300 less than we could buy it locally, with “free” (there is a $25 “handling charge”) curb-side delivery. For another $89, we could have the fridge brought into the kitchen. But the company does not offer installation (for the water and ice machine) and it won’t haul away the fridge we hate. The deal was similar at US Appliance, where the shipping was “free” (with a $30 fuel surcharge) and the “white-glove delivery” (where they bring it in the house) cost $90.

As I do with any merchant I’ve never bought from, I next searched on the name of the merchant and the term “complaint” in Google. US Appliance got pretty mixed reviews at Epinions.com but the reviews didn’t indicate so much a shady outfit as a less-than-ideal customer service experience, which is just too common these days. Finding intelligence on Number 1 Appliance was harder but I did find a discussion where many people had positive experiences with the merchant and offered some hindsight advice.

I jotted down a couple of good suggestions from there: Make sure the delivery person waits while you inspect the goods. If you let the delivery guy leave, you have agreed the appliance is in fine shape. Some people discovered dents only after letting the delivery guy leave. These online merchants demand return shipping and a 15% restocking fee if you change your mind later. But the best advice here was to take the price you find online, call a local merchant, and see if they will match it.

I called my local Home Depot, which has the fridge in stock and offers free setup and delivery (including hauling away the old fridge) for $200 more than I would pay (with “white-glove delivery) from Number 1 Appliance. I called to see if they would match that price. Nope. They don’t match online merchants and the person who answered the phone “Had no authority to reduce the price.”

I eliminated Sears.com from this competition early because their Web site was so embarrassing for them. I just couldn’t continue. Many links led to a page that reads, “You are not authorized to access this page.”

But I called the local store. It didn’t carry the fridge I wanted.

At my local Lowe’s, the fridge wasn’t in stock but the sales guy offered to get it. And, while he couldn’t match the price at Number 1 Appliance (though he said he could have if he’d had the item in stock), he offered 10 percent off his retail price â€“ and he would deliver for free and take away Crazy Fridge. That brought the price to within $100 of the white-glove-shipping-included price at my favored online merchant. Best Buy offered me an identical deal, saying they don’t price match against online merchants but they would match what Lowe’s had offered me.

Next? We are planning to go in to the local Home Depot over the weekend (the only one that has the fridge in stock) and see if we can escalate this price-matching request to a manager. If not, we will then decide if the comfort of buying from a store we can set foot in (and that is willing to take possession of our insane fridge) is worth $100.

Now if someone would offer to haul away the old fridge and torture it for a decade the way it has tortured us, that is just the sort of service that would make me a loyal customer.

10 thoughts on “That Darn Fridge!”