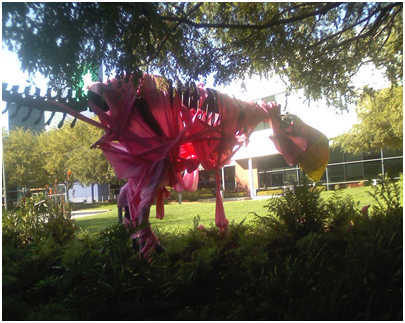 Yesterday, I took a mini-tour of the Googleplex in Santa Clara. It was a bit like traveling to see the Wizard in Oz â€“ except I drove down Highway 101 instead of skipping along the Yellow Brick Road.

I ate in one of the (I’m told many) cafes and got a delicious Cayenne Agave Lemonade at one of the (I’m told many) drink stands. In both cases, I was spoiled for choice and would like to go back and try everything I couldn’t choose yesterday. So, for all of you who asked, the rumors of abundant, free-to-employees, incredible food at Google are true.

Aside from exploring the food at Spanish tapas cafÃ© â€“ cafeteria style — I also enjoyed the company of some cool people on Google’s PR team who have all been — up till now â€“ just email and phone buddies.

Then I did an enlightening conference call on the safety of cloud data with Eran Feigenbaum, who compared storing data in the cloud with putting cash in the bank: At first the idea is hard to get used to but ultimately banks â€“ like Google â€“ do turn out to have much better security than your mattress. When you put it like thatâ€¦.

Next, I met Google’s “Digital Mom,” Jen Mazzon. We had a whirlwind exchange of ideas about parenting in a digital age before she (literally) ran out of the room to her next commitment. Jen was project manager on Google Docs and is now an expert on using cloud tools to keep from going insane. She should know. She is a working mother of three kids under six (two of whom are twins). One idea she shared that I wish my kids’ preschool had used: Keep a daily log in a Google Document instead of on those useless paper forms preschools use. That way parents can respond right there in the online document and it becomes not only a conversation about care but a collection of anecdotes that become a keepsake of those crazy early years.

Then it was on to meet the folks who keep Gmail running. Among the desk covered with stuffed animals, the three dogs — all of whom were out to lunch when I was there — the fully stocked bar, couches, beanbag chairs, and bicycles, this team was working hard programming whatever is coming next to Gmail. They claimed to have big secrets they couldn’t tell me. But this was said with a wink, a nod, and a promise to fill me in when they could. Were they just messin’ with me?

Then I stalked the dinosaur (shown) that lives near the volley ball court. He was dressed in pink yesterday to provide him with a bit of cover while he stalks the pink plastic flamingoes that scatter in front of him as he approaches.

Was there something you wanted me to ask while I was there? You should follow me on Twitter. It was one of my Twitter peeps who asked about the dino. Otherwise I might never have known he was there.

2 thoughts on “Stalking the Google Dinosaur”