When my mother got a new digital camera, she called me to reserve as much time as I would give up to help her learn to get her pictures off the camera and into the lives of her friends and family. Now that she has it figured out, though, I wish I’d never participated. 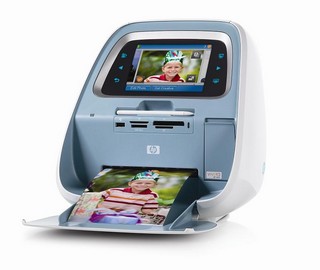 The problem is she pelts everyone she knows with astonishingly unflattering photos of me and my sister. “This one makes you look so lovely!” she pens next to an image that makes one or both of us look like we just rolled out of our Vegas trailer after too many long nights on The Strip. This wouldn’t be so bad if she didn’t copy large groups of people on every email, giving a substantial portion of the world the impression that Dianne and I are closely related to the witches in Macbeth.

Then HP asked me to review their new A826 Home Photo Center and I got an idea. I’ll get her a photo printer for Mother’s Day.

This little baby will appeal to my Mum because she doesn’t need to connect it to her computer at all. It will grab photos right from her camera and let her add text, frames, and other artistic effects to her shots simply by touching and typing right on the screen. Then she can print them right there. She can print batches of the things if she wants. So she could even turn her favorite photo into Christmas cards. And it has on-screen video animations of how to do everything so I won’t have to help her.

But the best part is she won’t be emailing those photos to anyone! She’ll have to put a stamp on them and put them in the mail. And I know this will slow her down.

Then again, she did mail out that humiliating picture of my brother, bleary eyed and with his hair sticking straight up. She screamed at him to get out of bed—then snapped his photo when he came running. I still have that one on my mantle. (It is pretty funny.) With A826 Home Photo Center she could have written—right on the picture—”This one makes him look so handsome!”

1 thought on “Mom and the Digital Camera”