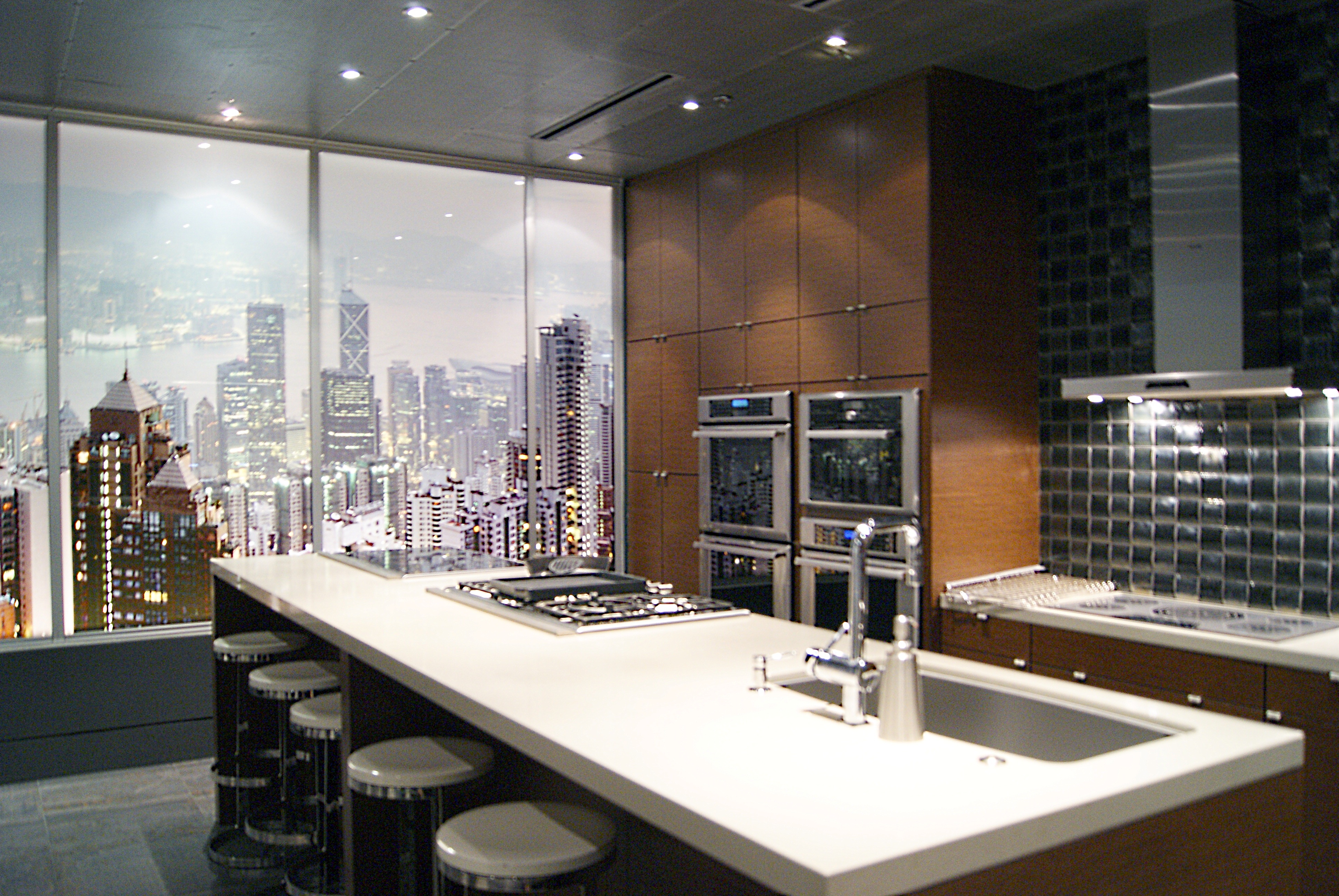 My day at the Bosch demonstration kitchens (one of which is shown above) was a feast of food and a look at intimate inner working of domestic appliances.

There were no immersion cookers, autoclaves, freeze driers, Bunsen burners, or other lab equipment turned appliance but we did get to wear lab coats. (In fact, the lovely and charming Christen of Divas and Dorks posted a photo of us all in our coats.) There is something about putting on a lab coat that makes everyone look as if they stepped off the set of Bones. 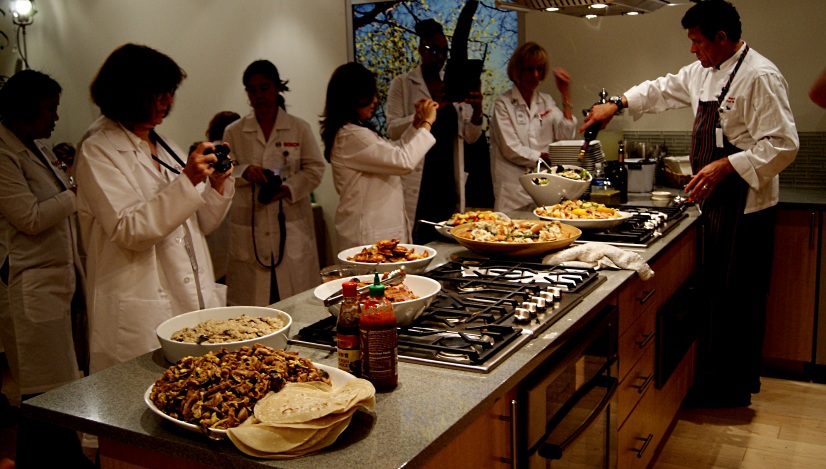 The science experiments and appliance dissections were fun. But the food was fabulous. Chef Brad fed us an amazing breakfast. I have never known Quinoa to taste so good. And the man is an artist with agave syrup. Then – after we geeked out for a while — he led our rowdy crew of bloggers through preparing an equally amazing lunch. I plan to Tivo his just-launched TV show the minute I get home.

Today, I know more than I ever thought I would about what makes appliances tick, I have serious regrets about the appliances in my own home, and the geek in me is intrigued by Bosch’s induction cooktops.Â This is a relatively new technology in cooking and the Bosch engineers assured me it would rapidly change the way kitchens are designed.

Until the induction cooker started cooking, I wouldn’t have been able to pick it out of a police lineup with a half-dozen electric ranges. But once we turned it on, the difference became obvious. With the induction range, the cooking surface never gets hot. Only the pan heats up. It uses magnetic waves to create friction within the molecules of the ferrous metals in the pan. (So you have to use pans with iron in them. My stainless Calphalon pans would work just fine.) Since there is no hot surface to make getting close to the range uncomfortable or dangerous, there is no need to place it away from sitting areas in the kitchen. I am imagining a fun Hibachi grill-type setup on the island in my kitchen where I could cook – and eat — with my kids.

And what kid would not enjoy this experiment done with a pan the Bosch people have cut in half for the purposes of this demonstration. The egg that’s in the pan is cooking away while the egg on the cooktop (and a blogger’s hand) remains raw. 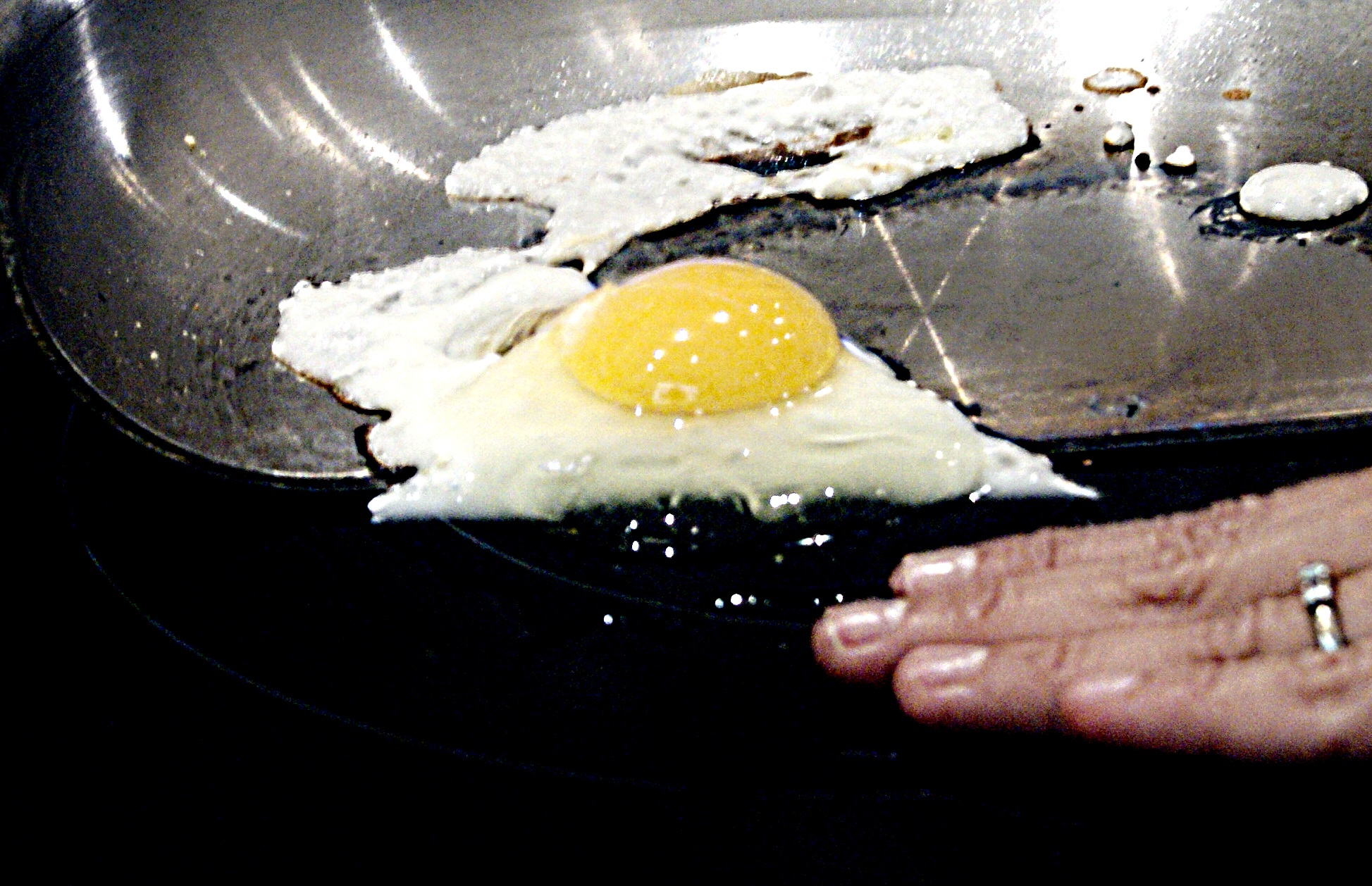 I’ve never liked cooking on an electric range. They don’t get hot enough fast enough. But we did some pseudo-science experiments yesterday to compare the heat and speed of induction ranges to both gas and electric. The induction-excited pans got hotter faster — they boiled water about twice as fast — than either of Bosh’s high-end gas and electric ranges. Very interesting. And since the range never gets hot, you never have to clean up cooked-on spills.Â I hate to imagine the mess if I tried this experiment on a gas range.Â I like to cook spicy Thai-inspired stir fries and until yesterday believed that a gas range with a power burner was the only way to do it right.

3 thoughts on “If we’re wearing lab coats, it must be science”