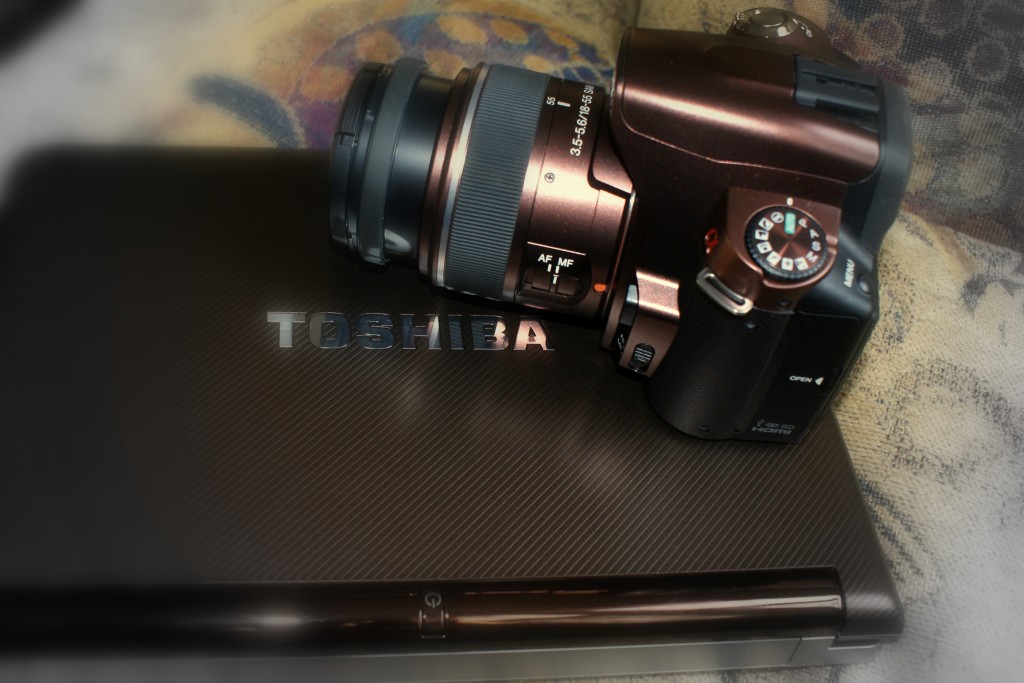 Aren’t these two pretty together? That’s the Sony a330 DSLR camera and lens kit ($549; Â list price at SonyStyle.com) sitting on a Toshiba mini NB300 ($399.) Not only do they look good together they would make a terrific mobile photo team. I am pretty enamored of both of them.

The camera is the latest in the Sony Alpha line. And if you are thinking about moving up to a DSLR, this would be a great choice. First, it’s adorable so it would be very easy to bond with. You would quickly want to buy it pretty a camera bag and have it with you always. And having a great camera with you all the time is really the best way to take great pictures. The a330 has lots of great technical specs inside that classy brown body (10.2 megapixel, stores to two kinds of media, and lots more). But I think the coolest feature is that it will teach you how to use a DSLR as you shoot with it. Just choose a setting and it will explain what sort of shot to take with that setting and what all the camera jargon means. Because who can actually find the manual when they decide to get creative? Just look at the LCD screen for an in-camera tutorial and take your photos to the next level. That is such a great use of that little LCD screen, which you can also use for a live view of the subjects you are shooting.

The little Toshiba Â is a powerful,Â portable Â Windows 7 machine at a pretty reasonable price (given the specs.) And here is a dweeby guy from Toshiba (below) to tell you all about it.

I just watched this video. I didn’t realize till I did that Toshiba is claiming 11 hours on a single charge. Now I have to test that claim. I’ll let you know. In fact, I’ll take it for a serious spin and report back on it soon.

2 thoughts on “A Pretty Pair”