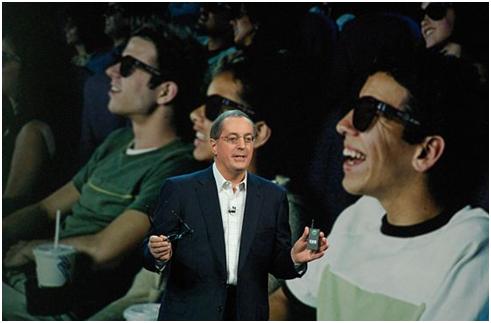 I attended a surprisingly entertaining Keynote address given by Paul Ottellini (above, not wearing 3D glasses) of Intel at CES last week. Even if keeping up with processors isn’t your thing, it was an entertaining and informative show â€“ complete with a goofy look at the future and a sarcastic visit from the Magic Mirror from Shrek. (If you are interested in listening to the entire thing, here’s a link.) As any geek will tell you â€“ and as Ottellini pointed out in the keynote â€“ Intel is a company driven by Moore’s law. But that sounds so darn nerdy, few people take the time to think about it.

Moore’s Law states that the number of transistors that can be placed inexpensively on an integrated circuit doubles every two years. See? Nerdy.

There are a lot of proclamations in our culture that call themselves “laws.” Some are laws of physics such as Boyle’s Law, which is mostly interesting to SCUBA divers who don’t want to die. Some laws simply state things we all know to be true, such as Murphy’s Law, “Anything that can go wrong, will go wrong.” And then there are laws that ban things like theft and murder. And there are laws that govern the human ability to make a decision and stick to it: contracts. A marriage contract is one of these: Two people make a commitment to go into the future together and sort things out together even though neither can predict what will happen.

With all that talk of “integrated circuits,” it’s easy to mistake Moore’s Law for a law of physics. But it’s more of a marriage commitment-type law. Intel has decided that, no matter what happens â€“ poor economy, no idea how to do it, natural disaster, hell, high water, etc. — it will see Moore’s Law through by doubling the number of transistors it can put on a circuit (inexpensively) every two years. As Ottellini put it in that keynote, “It’s a law that reflects human inventiveness. We’ve been able to advance technology with consistent predictability by embracing the unpredictability of the discovery process. Every two years, we schedule a breakthrough. Each step along the way takes six years to build and costs $12 billion a step.”

Probably more than any other single thing, that idea â€“ decision, commitment, whatever you want to call it â€“ is what is setting the pace for the technical innovation that keeps high-tech moving so fast it’s hard for most of us to keep up.

Last year, the low-cost Atom processor launched the spate of netbooks we are all buying â€“ and loving â€“ right now. This year, the family of processors Intel announced will bring 3D movies to our living rooms, the ability to shoot home movies in 3D, mobile devices that are insanely capable, and computing power to everything from the car to the fridge to the thermostat. I’ll get into more detail on these new technologies as I find time this week. Or you can go listen to Ottellini tell you all about it with a vast array of visual aids, some of them pretty darn silly, right here.)

Right now I want to take one more opportunity to rant about the lack of flying cars in 2010. While I was listening to Ottellini, I realized who is to blame for the complete failure of the future (which is now the now) to provide us with the flying cars we were duped into believing would be here when we arrived. “With all respect to our friends in the auto industry,” he explained (not showing a demo of a flying car). “If their products had produced the same kind of innovation, cars today would go 470,000 miles per hour, they’d get 100,000 miles per gallon, and they’d cost three cents.”

So, by that math, not only would cars be rocket ships, we’d all be able to afford one — or two. That is the future I was promised! Dang you car makers! Where is your commitment?

On the other hand, I am looking forward to getting one of these very Star Trek mobile devices (below) that Pankaj Kedia (doesn’t he look like a rock star?) showed off on Friday. It’s the LG Electronics GW990 smartphone due out later this year. I’ll have more on that phone â€“ and the other devices Pankaj was showing us — later. 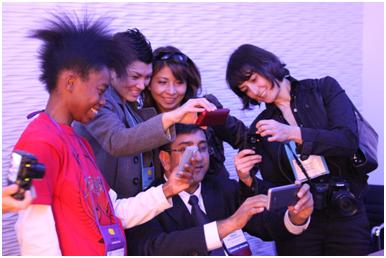 1 thought on “Why Does Technology Change So Fast?”