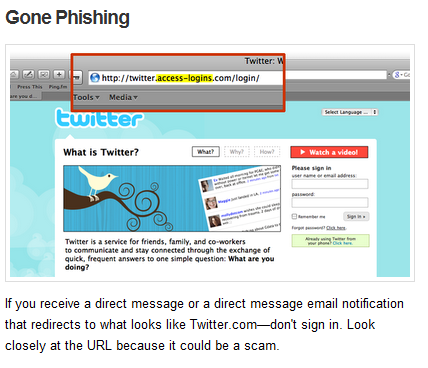 The Twitter Blog Explains the recent spate of phishing scams

Oh sure it seems like a complete waste of time at first. (And it can be a big time waster.) But now I don’t bother to read the local paper because I follow the Twitter feed of the headlines. I’m more current with the local news than I have been in years â€“ all in 140-character hits to my cell phone. If I want to know how to do something, if anyone else has seen a trend, or just to make an announcement, I can do it myself in 140 characters from my computer or phone. I have a decent crowd following me now so I almost always get answers, responses, or whatever I’m looking for in rapid order. And I know I have answered more than one desperate technical question for someone who needed to know something immediately. If you don’t already, why don’t you come follow me on Twitter?

Lately, though, the spammers have hit twitter. I have gotten several direct messages from people I don’t really know well but who are in my Twitter crowd. (Just exactly as described in that C|Net story in that last link.) The messages say something like, “Check out this funny Web site.” And they provide a link. But when I follow that link, I land at a Web site that asks me to log in. (So far the Web sites have looked just like the Twitter log-in page.) That Web site is not real. It is a dummy site designed to capture your log in information and hijack your Twitter account. (So far they look like Twitter log in page but phishing scams can lead to what looks like bank sites or anything the scammer chooses.) I know this because the Web address is wrong and because Twitter doesn’t ask me to log in when I’m already logged in. Also, I make a habit of not entering log-in information when I followed a link to arrive at the site.

In short, I know a phishing scam when I see one so I have not been caught by this one. And the last few of these that I got, led to a site that Twitter had already taken down. Even the direct messages have disappeared from my Twitter account so the folks at Twitter are obviously on it. But I just want to warn any of you who are using Twitter that these ARE phishing scams. These scams are relatively new to Twitter — though you probably get several phishing scams a day via email. But I’m sure there will be more of this nonsense now that the idea has caught on. Kudus to Twitter for posting a warning so quickly and dispensing with all danger before I even had time to take a screen shot of it!