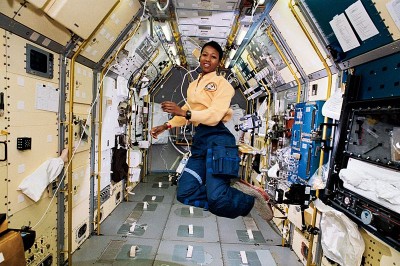 If you read and enjoyed The Technologist (or even if my review made you think briefly about putting it on your Kindle) — or if you are a woman or know a woman who works in one of those male-dominated science fields — I’m sure you’ll enjoy this compilation from Txchnologist on women who have accomplished great things in science, technology, engineering, or math. We all need inspiration and role models.

Maybe you have a daughter who’s afraid to be called a nerd by her middle school friends?

She might need to know about women who ignored all that to have fascinating lives. Maybe point her to Mae Jemison who “has logged more than 190 hours in space and is the first female African-American to orbit the Earth. She holds nine honorary doctorates and a patent for a medical monitoring device. She has also appeared in an episode of Star Trek: The Next Generation.” Because I’m petty sure, even by middle-school standards, that’s cooler than having great hair and perfect lip gloss. (Though Mae probably has great hair, too. In fact, she could probably tell you the best hair style for zero gravity.)

It’s a quick read. And you’ll have some great fact tidbits to share at dinner.

Thanks to GE for sponsoring that site!