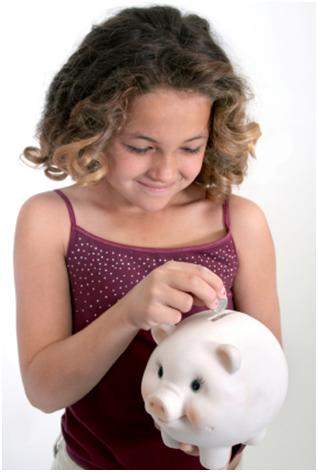 Over the weekend, I implemented a new fiscal strategy with my two tweens. It started out as one of those things I felt I should do as a parent and quickly turned into a fascinating social experiment that uncovered the financial personalities of my children.

On the advice of several financial gurus I’ve been speaking to for an article, I realized I was not teaching my own children enough about money. So I decided now was a good time to take their feeble allowance to the next level by giving them a monthly allowance and responsibility for buying their own clothes, entertainment, and haircuts. But rather than throw the money at them and let them learn by doing, I sat them down in front of the computer for a quick lesson in budgeting.

I wanted a simple budgeting tool that did not require they have bank accounts. So I fired up PearBudget.com and filled in their allowance and asked how much they thought they would need to spend in each of the categories. It was quick and fun. My daughter (10) enjoyed herself thoroughly. My son (12) insisted he didn’t want money; he wanted me to keep paying for things. But he grudgingly answered all my questions.

When we came to the savings category, though, things got very interesting. It was also insanely cute.

I told them both that they would be responsible for their own pocket money when they got to college. My husband and I both told scary “When I was a kid” stories about how broke we each were in college. (Broke. Really broke.) Then I asked each of them to imagine themselves at college and asked, “How much money does the person you are picturing need each year to live?” My son looked horrified that this moment of fiscal self-reliance would ever come. My daughter said, almost without hesitation, “$3000!” And after a little mental math, she decided she would need $12,000 in running-around money to be a happy four-year college student. (I didn’t laugh. I swear I didn’t.) She’s a high maintenance Princess but at least she knows herself. Bowing to her confidence on the matter and still in a state of shock that I wouldn’t be there to pay for things, her brother agreed with her estimate.

So, starting with my daughter, we went to Smartypig.com to set up a saving account that would take the savings out of her allowance on the first of the month. When she did her budget, she had only allocated $2 a month to savings. So I knew she was in for a shock.

We plugged in her goal ($12,000) and the year (2017!) she would need to have the money. It told her she would need to save $105 a month to achieve that goal. Suddenly she was in a hurry to save for this mythical moment when â€“ if she didn’t start saving — she would not be dressed in style like the hip student she pictured but wearing rags and living on Ramen noodles. So, after ratcheting back her future standard of living considerably, she went through her budget with a fine-tooth comb crossing out frivolous items that five minutes before had been essential to her existence. She was ruthless. She decided she would use the library instead of buying books. She would get her hair cut less often and cut back on her clothing allowance. Finally she had a lean budget with 25% devoted to savings. She was happy about this and proud of her decisions. She was also planning to hit up all her family members for contributions to her savings (a cool feature of Smartypig.com is the social savings element that allows people to contribute to your goals) rather than ask for toys at Christmas and her birthday. I was stunned.

Things went about the same way for her brother, though he clearly wasn’t as happy about the process. “I don’t want an allowance,” he moaned. “Can’t you just pay for everything?” But he was just as serious about saving for college and just as ruthless with his budget.

After they had each settled on how much would automatically go to savings, we put cash into envelopes with their budget categories written on them so they would know how much they had decided to spend on things.

Almost as soon as we were done with this lesson in money management, my son’s friend called and asked if he wanted to go the mall. (This was a first for him.) “Can I have some money?” He asked. I pointed out that he had an entertainment budget and that was up to him. He perked right up. “Oh, I forgot!” Suddenly he saw the benefit of fiscal independence.

When he got back from the mall, though, he bragged that he had only spent $5. If I’d given him cash, he would have spent every last cent in case I asked for change.

This is â€“ so far — a very successful experiment.

In other news: Last chance to get in on my amazing ScanDigital giveaway. I’m using the Randomater 9000 to pick a winner tomorrow.

7 thoughts on “Our High-Tech Money Lesson”