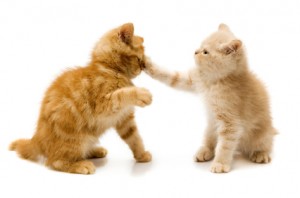 Sometimes I think the world has gone “App” crazy. Just yesterday, I responded with urgency to what sounded like an all-out cat fight in my living room. (We have two cats. They do fight but usually in an amiable way.) When I rushed to the fur-flinging scene though, I discovered the ruckus was being caused entirely by my daughter playing with a “cat fight” app on her iPod touch.

“They have an app for everything,” she said, grinning that her plan to get me running had worked so well. It’s true. There does seem to be an app for everything â€“ even simulated animal disagreements. (Weight Watchers sent me a list of iPhone apps recently that looks pretty handy. I’m debating if I should publish them here. I don’t usually publish product recommendations for stuff I haven’t tried myself but this was a handy list. Let me know in the comments if you want it.)

I don’t have an iPhone or an iPod touch. I don’t have an Android phone either so I can’t tap that growing library of Apps either. So â€“ despite the impressive array of gadgets I sport â€“ I sometimes feel left out. So I was very excited by Intel’s announcement at CES that the company has launched an app store for netbooks. I have one of those! The idea is that the company that sold you your netbook can use the developer tools Intel has created to build its own app store. But, by way of a demo to get things rolling, Intel created a beta app store up at Intel.com/appup.

I’ve been trying it out a bit since I got back from CES. And it’s pretty slick. First you have to download a bit of software (available only for Windows XP and Windows 7) and give up a credit card to cover future purchases. But once you do that, you have a nice little store on your netbook that’s fun to browse, organized by real-life categories such as finances, family, and social, and that serves up tools you can use when you are out and about.

I have grown quite attached to the social network app, Yoono, in the week I’ve had it. It gathers together all the social networks I use into one constant stream â€“ or pop-up â€“ on my little netbook making it much easier for me to keep up with what’s going on with my peeps in Facebook, Twitter, LinkedIn, and etc.

The app store is a bit sparse at the moment but I’m hoping some of the categories fill in soon â€“ in particular the Health and Financial ones. I’ve been uninstalling some of the software on my netbook â€“ the stuff that’s designed for more powerful machines and that runs slowly there â€“ and hoping I’ll be able to find some light-running apps to replace it with.

I met a bunch of the people behind the AppUp Center at a party at CES and was asked, “What apps do you want to see?” I had a few wine-inspired ideas right then and there â€“ an app that syncs with my Toodledo.com to-do list so I don’t have to log on to tick things off, something that helps me track doctor’s visits for my kids and pets (because the netbook is what I have with me in the waiting room), and now, since I have to keep up with my 11-year-old, something that simulates a cat fight.

But I also promised to ask you what you’d like to see. Got ideas? Put them in the comments.

2 thoughts on “Crazy World of Apps”