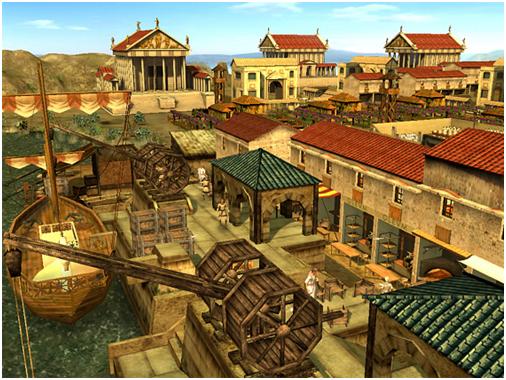 I’m a late convert to gaming. Okay, well, that’s not entirely true. I got very addicted to a text-based mystery game back in the 80s and I kicked hiney at Pac-Man when I was dating in college. But then I got a job, husband, house, kids, and too many pets and no longer had time for that sort of thing. A couple of years ago, though, I got an assignment for Family Circle reviewing games that moms could feel good about their kids playing and it was like I fell off a cliff. The game CivCity: Rome hooked me. I couldn’t stop. My people needed villages, aqueducts, raw materials, armies. I had to make sure the cities were running well. I was in charge! And along the way, I was learning all sorts of interesting stuff about Roman civilization. I dimly remembered that I had actual children in my care, too, who might want dinner and tucking in. But, for a while, I was lost to that ancient world and helpless to leave it — even though I wasn’t, according to my then-11-year-old son, very good at the game.

It was fun to fall into another world and I felt smarter after playing. That was a nice feeling. When I got to the end of the game, and looked up, though. My euphoria evaporated. What a mistake! The house was a disaster, my husband was pissed off, and my daughter had learned to open a can of Chef Boyardee Ravioli. (She had even figured out how to heat it up.) Only my son â€“ just as embroiled in Civilization â€“ understood. I swore not to pitch any more articles on games or fall prey to the temptation these world-building, sandbox games offer me.

I play casual games (like Pogo.com) and the occasional parlor game that came with Windows Vista (Hearts and Mahjong Titans are my favorites). I have seen studies indicating small hits of this sort of mind-vacation are great for stress relief. They are certainly better than a trip to the candy bowl when I need a 15-minute break. So I indulge in those freely. But the games that suck you in and ask you to commit to building an empire? No more. I clearly have too much on my plate.

But now I’m thinking I should revisit that decision. A study came out last month that seems to indicate that my post-game “smart” euphoria was real.

According to Psyorg.com, University of Illinois psychology professor Arthur Kramer and his colleagues studied the effects of gaming on older adults’ cognitive ability and found a significant improvement in reasoning, the ability to switch between tasks, and memory. These improvements weren’t limited to game play either. After playing, test subjects did better on a variety of tests that measured their executive control functions â€“ something that apparently gets worse with age. The study used the game Rise of Nations, which is similar to CivCity: Rome in that you build a world and manage its resources. “You need merchants. You need an army to protect yourself and you have to make sure you’re spending some of your resources on education and food,” said postdoctoral researcher Chandramallika Basak, lead author on the study in the Psyorg.com article. “This game stresses resource management and planning, which I think for older adults is important because many of them independently plan and manage their resources.”

I’m not as old as the study participants but I do believe in prevention. Maybe I should take a night off from blogging and play some games? I know my son would be pleased to see me back in the world of gaming. He liked having an ally. What about you? Do you play games? (You know I need a little moral support here and if “all the GGFs (geek girlfriends) are doing it” what can my husband and Chef-Boyardee-eating daughter say?)

As someone with a particular interest in 17th and 18th Century American history, I am seriously tempted by the new Sid Meier’s Civilization IV: Colonization. Dare I?

1 thought on “Am I Smarter Because I Play Games?”