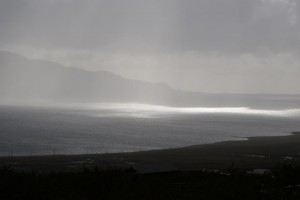 Did I mention that I’m in Iceland? I have been here nearly 60 hours and this is the first moment I’ve had to think about sitting down and posting, though I have a lot of tales to tell.

I’ve soaked in the geothermal accident that is the Blue Lagoon. (More on that later.) I’ve hiked unpronounceable mountains in search of trolls and hidden people. I’ve toured the largest banana grower in Iceland and soaked in hot mud to Muzac versions of Abba tunes. I have faced the dangerous boiling ground of an active geological mountainside. And my hair has been dipped in so much silicate, mud, and unique ecosystem that no amount of washing will get the stuff out. Most incredible though is that I have done all of thisâ€”in the middle of the night (in my time zone) and occasionally nakedâ€”in the company of a group of people I met for the first time 60 hours ago. This is the Outward Bound of spa focused press junkets and it’s pretty amazing. I’ll get around to telling you about the healing waters of the Blue Lagoon, the fairies, trolls, deep sea fishing, roasted Puffin, whale meat, and drinks served on and over glacier ice. But first I have to tell you about the unique relationship the Icelanders have with steam.

Iceland is geologically active and the Icelanders think this is the best thing ever. They have no trees to burn, no oil, and they are sitting on an erupting volcano and they are pretty smug about. “This is an enviable position to be in,” explained our coldly ironic guide Ari. All that free, clean, energy is just waiting to be tapped. And the Icelanders are at the forefront of rushing right at it so they can turn it into electricity, hot water, and spas. They drill into the ground where they know there is hot magma and gather the super-heated groud water. Then they bring that water, which is four times boiling temperature yet still liquid, upâ€”under pressureâ€”and turnÂ its energy into electricity, hot water to soak in, hot water shower in, and even electricity to power cars.

If you own an electric car, you can park and charge it for free in lovely downtown Reykjavik. Pretty darn neat. According to one of our guides, the enigmatic and informed Thor, “We have created the perpetual machine.” (The words, “By Thor’s Hammer!” have been bandied about pretty liberally on this trip.) 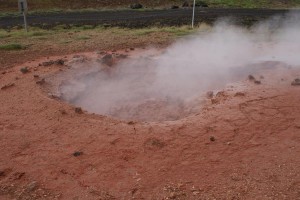 Yesterday, after eating bananas grown in a greenhouse heated with geothermal steam, we took an amazing hike in the nearby mountains to see some of this charming geothermal energy in action. Back in May, this area was hit by an earthquake that measured 6.8 on the Richter scale. Buildings and mountains were damaged but there were only minor injuries. The earthquake, though, opened up a series of hot mud springs in the ground near the banana grower (and horticultural school).

I know “hot mud” sounds like something that comes with cucumbers on the eyes and mineral water with a sprig of mint. But trust me. You do not want to soak in one of these. (Can you tell that the mud is literally boiling in the above photo?) The ground is warm to the touch in this area, steam rises up off the boiling rivers, plants are boiled alive and, in some places, pits open up to reveal why: The water underneath the ground is boiling. The locals put up these really cool signs to warn people because if you step in the wrong spot and fall into one of these, your skin will be boiled right off.

As of today, we are slightly more settled so I will have more Iceland posts for you. But if this geothermal stuff isn’t geeky enough for you, how’s this: Cell phone connections (through T-Mobile, ATT, and others) are fine here. I called T-Mobile before I left, they hooked me up with a free International add-on and I can get my calls here, though they cost 69 cents per minute. Text messaging also works fine. And Iceland is very wired, even in some of the more remote areas. Wi-Fi is readily available and often free.

2 thoughts on “Where the Ground Boils, Do Not Tread”