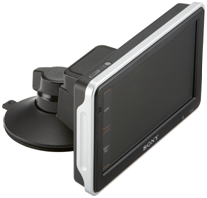 We were hurtling down Interstate 980 on our way to Monterey. I was riding shotgun and my husband Dan was driving. He is not what you would call a cool-as-a-cucumber, got-this-under-control driver. So riding shotgun challenges my calm. Is this a good time to point out that tailgating is dangerous or that it’s unreasonable of him to expect everyone else to get out of his way? Probably not. So I try to stay mum. I don’t always succeed.

While I was silently struggling to withhold comment, 12-year-old Cole asked from the back seat, “Are we going to Target?” We had planned to stop midway and do some back-to-school shopping and eat lunch. This was about halfway. We were somewhere in the hinterland (in my mind) that is Fremont, San Jose, and Milpitas so we had no idea where a nearby Target might be. But none of that matters anymore. We have technology!

When we rented our car, Budget offered us a GPS unit for $18 a day. We laughed. “You are insane,” my ever-polite husband told the clerk. “At $18 a day for 2 weeks, we could buy a GPS.” This is true. A GPS unit that you plug into the cigarette lighter can be had for less than $200. And we got the car through Priceline and were paying $20 a day for it so the question was already silly. Fortunately we didn’t need a rental GPS because Sony had shipped me a nav-u NV-U832 ($399.99) to test out on our vacation.

In answer to Cole’s question, I whipped out nav-u, and asked her to find a Target near us. Even though I had no idea where we were, she did — precisely. She demonstrated this by displaying an image of us on a map, hurtling down the freeway.

“In 2 miles, exit right,” nav-u announced. She even displayed a goofy image on her big (4.8″) touch screen of exactly what that exit would look like, which I held up for Dan. (This is just an example.) 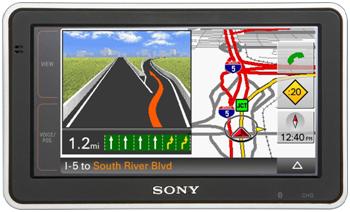 I could see his shoulders relax, the tension of uncertainty evaporating. “In 300 yards,” nav-u announced a few minutes later. “Exit right.” And she gave the name of the exit and a reminder visual of what the exchange would look like. We followed her directions to the letter and found ourselves looking at a building demolition that looked like it had recently been a Target.

One of the differences between most in-car GPS units and, say, Google Maps, is that the databases aren’t as up to date. And Target has been on a massive growth campaign. No worries, though, nav-u informed us there was another Target in 5 miles and guided us effortlessly back to the freeway and into the parking lot of same.

After lunch, we found ourselves back on the freeway facing what I consider to be dangerous territory in any marriage: A major decision about which route to take. As I faced this treacherous juncture — irritated as much by Dan’s insistence on driving as by his actual driving — I learned there are more reasons than navigation for having a GPS in the car.

Nav-u and I also developed a silent bond of mutual understanding.

As we approached the exchange for 101, nav-u announced in her calm, certain, computer-generated voice that we should stay on I-880. (Some GPS units let you choose all sorts of voices but nav-u offered us only male or female.) Dan responded exactly as you’d expect, “Only an idiot would choose to drive through the Santa Cruz Mountains when 101 is obviously the route to take,” he told her. He rolled his eyes. His posture indicated he’d made up his mind about her. She held her ground, insisting calmly. I looked out the window. When nav-u didn’t back down, insisting more intently as the junction grew closer, Dan became visibly angry. I could see he was choosing his words carefully as there were kids in the car. So I quietly turned off the real-time traffic feature that nav-u uses to automatically reroute you when she sees potential trouble spots. Suddenly she agreed with Dan and started offering helpful directions and offering her cute visuals to help him negotiate tricky on-ramps to the route he wanted. He smiled. He was right; She was wrong. All was right with his world. Nav-u was very gracious about it — more gracious than I would have been. And if she wasn’t mad, why should I be?

Then we hit traffic. I idly mentioned the real-time traffic feature I’d turned off. Dan frowned. If nav-u had said, “I told you so,” I would have understood. She didn’t. She continued silently noting our travelling speed as it dropped from 65 to 20, 10, 5, 0. But she said nothing about how she had been rudely dismissed as an idiot, probably because she was female. I admired her restraint.

Beyond that near miss, Dan and I didn’t have a single argument on that journey. And nav-u seemed not to hold any kind of grudge at all. Again, she is a better woman than me.

I may never possess nav-u’s calm confidence or her ability to let insults wash off her like water off a duck. But as long as I’m riding shotgun with nav-u in my camp, I suppose I don’t need either.